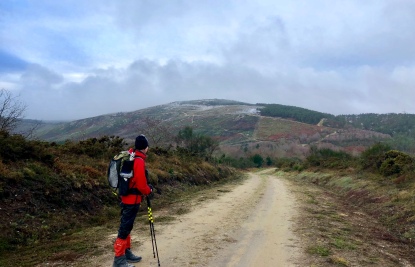 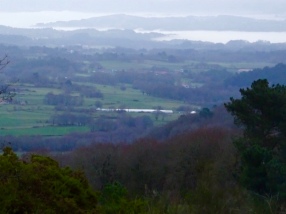 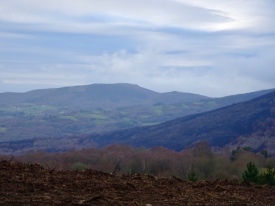 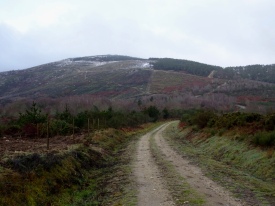 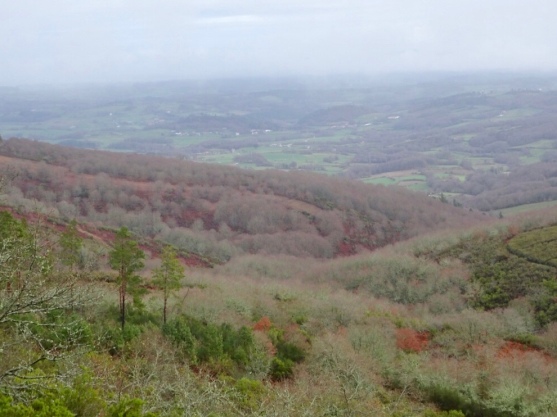 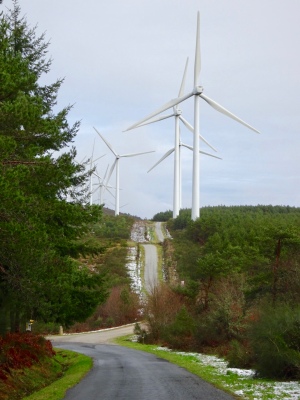 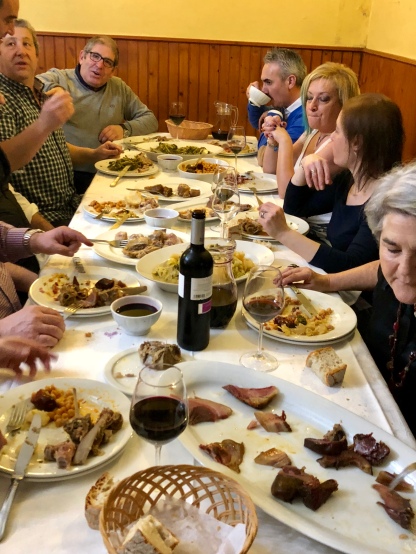 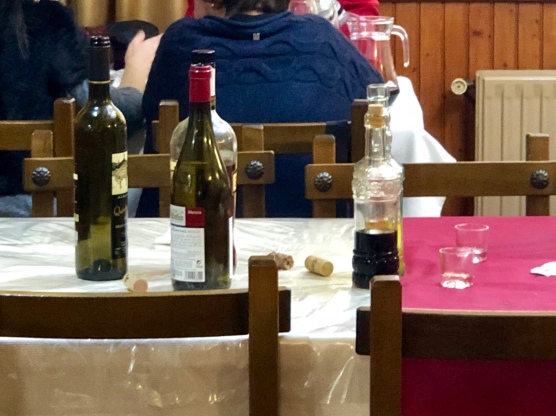 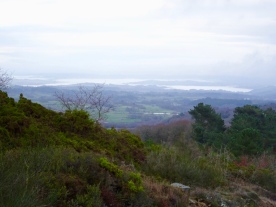 Ian, our host at CR San Estevo, agreed to drive us to Chantada. We had spent some long hours last night, after dinner, discussing world affairs with a young Spanish couple (he from Bilbao and she from Madrid) and our hosts Irene and Ian. Of course nothing got solved but the orujo bottles did suffer a plunge. We got to bed sometime after 1:00 am and woke up at 5:00 ready to go. Irene was up and about at breakfast while Ian was a little slow to answer the bell, but to his credit he had us in the car at 8:30 as promised, and off we all went through the ever present Galician mist that draped the hillsides as we set out.

Ian dropped us in Chantada right on the camino route. It was a Saturday and he cautioned us that some of the coffee bars might not be open at 9:00. But, luck was with us and we found a nice bar that was open and stepped in. The bartender was a helpful guy and before we knew it we had two coffee con leches sitting in front of us while he called a taxi to shift us along to the tiny village of Penasillas from where would start our climb up to Monte de Faro the highest elevation for today. We started our climb from Penasillas at 9:30. Almost immediately we were going up. We reached the summit an hour and ten minutes later. There was light snow at the summit and patches of mist and low clouds below us. It was also quite cold. My backpack thermometer read 37 F and we were walking into a 15 mph headwind so it felt a bit colder than that. Down we went following along a ridge filled with windmills. Their blades slowly carved through the overcast creating an other worldly appearance as we walked close by them for over an hour. Anyhow we walked along trading solitude for the whine of wind turbines. All we could do was to try and make the best of it, while we continued our descent. So down we went bundled up with almost all we were carrying watching the thermometer slowly inch its way upward. At last we parted company with windmill ridge and settled down into the much warmer valley below. Off came all the arctic gear and off we went through the emerald green fields of Galicia. We found ourselves at the door of the Hostal O Guerra in Rodeiros, our home for the night, at 1:40 pm.

We went in and inquired about our room. It was not ready and lunch was about to begin so could we just wait a bit until the staff got the lunch service underway. We decided to take advantage of this delay and have some lunch ourselves. We ordered from the daily menu and lingered on over our lunch until about 3:00 pm. At this point a flood of locals streamed in and filled up the dining room, and interestingly enough they all ate the same thing, cocido. Cocido is a generally applied name for a stew of meat and vegetables. When it is served the meat and vegetables come to the table on separate platters. The meat is frequently those hard to define bits that started out somewhere on our in a pig’s head. Nonetheless, it makes for a wonderfully festive meal. Judging by the number of platters being shuffled amongst the tables, it was a big hit. The restaurant servers put some serious effort into making sure that everyone was well fed and having a great time. Another hour and a half later we finally were shown to our room. Free drinks had been poured to assuage the delay. Despite the delay, the room was perfect and spotless. Robin and I are now in the unwinding part of our camino day. Tomorrow we off to Lalín. Once in Lalín, it will be just three more nights until we arrive in Santiago. Sadly our time in Spain is drawing to an end. But, not just yet. More tomorrow….